One of the most revered attractions in Africa especially the East and Central are gorillas and they are ranked among the first three preferred before tourists pick a destination when visiting.

Mountain Gorillas are only found in two locations in the world; in Rwanda, The Democratic Republic of Congo and in Uganda where they have been thriving for centuries. As of mid 2016, the mountain gorilla population was estimated to be at 880 by primatologists and the biggest number of these amazing touristic giant can be found in Uganda around Bwindi Impenetrable forest.

Mountain gorillas are one of the largest Primates and have a genealogy that has been traced back to the Proconsul Africanus apes that are believed in the volcanic mountains of East Africa 9 millions years ago. The species Gorilla gorilla was fully classified in 2003 by the World Conservation Union into two subspecies Gorilla gorilla and Gorilla beringei which encompasses both those found in Virunga and those found around Mgahinga plus Bwindi.

The gorillas are believed to have originated from their lowland relatives about 400, 000 years ago and migrated into the surrounding mountains, over the years centuries they have grown and adapted to their current homes.

The mountain gorilla is considered a little different from other gorillas mostly due to its physical appearance and characteristics. 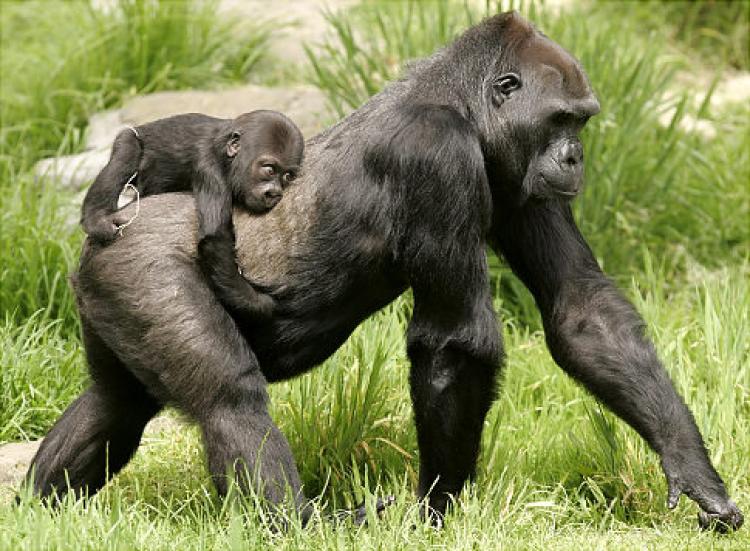 Although at first glance you will see a scary big gorilla especially when they stand to their full height, the creatures are not what we all think them to be.

Mountain gorillas as their name states often live in high altitude areas such as mountains and hills although there is the case of those that live in the Bwindi Impenetrable forest, which are argued by Primatologists to be different from the rest.

Gorillas are nomadic in nature and tend to build their nests almost on the daily, although these remain in the vicinity of their territory without wandering off.

The young ones live with the females while the adult males make their own nests. Over the years, habitats for gorillas up in the hills and mountains have been encroached on by farmers which also led to the drop in number of gorillas in some locations.

Gorillas are vegetarian and feed on fruit, bamboo shoots, leaves amongst an array of plants available in their habitats. They are large animals so they need to eat a lot for strength which they do almost all through the day but a known to not drink water as much.

How To See Them

The Uganda Wildlife Authority and Uganda Tourism Board usually organise gorilla trekking annually. If you want to do it with friends, you can get a permit or do everything through a tour agent to make everything easier for you. It is advisable to do the trekking when the season is not too wet to make movement hard.

Gorillas are a valued attraction in Uganda and albeit being hunted by poachers or attacked by other wild animals, they have increased in number due to efforts by the concerned bodies to protect them and improve their breeding habits.