A Sojourn Into The Wild Lake Mburo

Uganda, a beautiful country nestled in the middle of East Africa with the abundance of everything you would love to explore; it has the biggest part of the Victoria, several mountains that are worth climbing and beautiful creatures in the wild that will fascinate you.

There are several Ugandans that have been striving to change our very own outlook on this country’s tourism; they organize trips straight into the heart of our tourism sector. Places that open your eyes to so much more than you thought you knew about this country.

One of those trips is the Roundbob “Cocktails in The Wild”, where the travel company partners with Uganda Waragi to give several people a party themed camping experiencing; celebrating the beauty that is around us and making sure we have a good time while at it.

What Roundbob brings to the table are cheaper group travels to different locations whether in Uganda or South Africa. The charges cater for transportation, food and board, plus the different tours you will experience with the rest of the group during the trip. Over the years, they have made the travel experience seem more appealing to the young generation by creating themes that they can easily relate with.

This edition was scheduled to be held in Lake Mburo National Park, an expansive habitat for wildlife located off of the Masaka- Mbarara highway.

The second edition of the Cocktails in The Wild was very exciting to say the least. The journey started with the campers meeting up in Lugogo to get ready for the actual journey. The expedition from Kampala to Lake Mburo was wonderful, away from all the traffic snull up, hooting, racing bikes and people rushing to get somewhere. You could feel the excitement in the air on the buses, there were vuvuzelas, there was music, jokes and laughter. Several smiles exchanged as new bonds started forming, you could see the joy on everyone’s faces knowing that whatever was coming ahead of us was going to be “epic.” The feeling of freedom as we went past several hills green with leafy gardens, past forests so thick you only see darkness inside.

The best thing about a road trip out of Kampala is how they refresh your mind about your outlook on Uganda, away from the congestion you start noticing how cool the breeze without dust particles splattering all of your face. Then the roadside muchomo stopover, you can only understand how important this routine is if you are a frequent traveler in Uganda. As Ugandans, we love our meat especially roasted delicious meats and Lukaaya, a town that is half way through our journey has a lot of that. Several vendors will come shoving sticks of delicious looking meat in your face the moment the bus draws to halt till you buy something or they will keep cajoling you to buy. The best meats though can be found away from the roadside, right on the grills where the vendors get it from. You can pick it straight off of the grill, but since the buses only do brief stops you do not have time for selecting it raw so that it is prepared for you there and then.

There amount of selfies that were taken over the weekend would make a Kardashian jealous, from bus to bus; there were cameras snappin away. All over social media with the #CocktailsInTheWild you could follow what was happening in the other buses and also try to out compete them at whatever antics they were up to on the journey. Of course we had special Instagram moment when we reached the Equator monument and people went crazy with pictures whilst some were window shopping in the craft shops around the area. Note, the craft shops also accept Visa and Mastercard if you didn’t carry enough money for the indulgence. 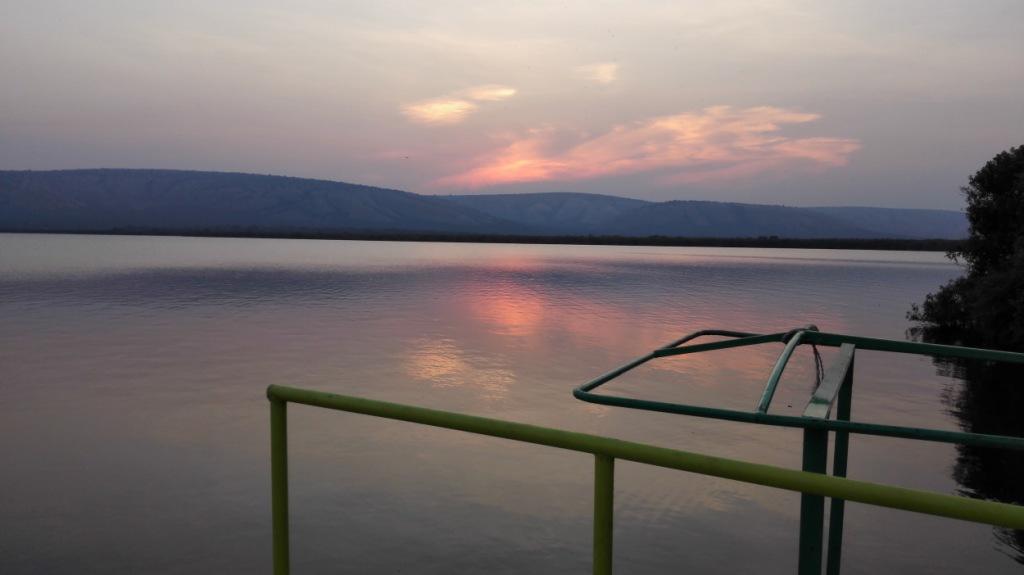 On reaching Lake Mburo, almost everyone went silent in anticipation of all the animals we were about to see and of course the long night ahead of dancing and interacting with the many different people that came along for the journey.

The journey from the main road our campsite took almost an hour, you have to drive slowly within the park just due to the several animals that occasionally cross through the roads and just in case you did you didn’t know that there are several signposts reminding you of that. Speeding in the parks or veering off of the main road is not allowed; if you do, there will be a huge fine to be paid.

The campsite was a wash with the dusk sun and glowing with several party lights showing signs of what was about to happen, several tents were set up all over the place as the lake lay peacefully a stone throw away reflecting the setting sun.

We were too hungry to notice all this beauty, first thing was to ask where the food was, find a tent that you would sleep in for the night and get ready for the free flow of cocktails through the night.

Throughout the night there was a DJ entertaining the campers while the bar kept the drinks coming, several circles formed all over the grounds as people got familiar with each other and dancing the night away. The music went through the night, it was up to you to either stay dancing or go to the tent and sleep off the fatigue.

The next day several campers went off for the game drives that they had come for, to learn more about the park and its inhabitants while the rest stayed behind to nurse hangovers from the night’s late dancing and indulgence.

The park has several different animals from the Impalas, Zebras, Hyena, Hippopotamus, Eland, Giraffes among others. The park has over 350 known bird species and an occasional sighting of crocodiles near the shores of the lake.

Lake Mburo is the smallest of the many other National Parks that are located in  Western Uganda and has over five lodges if you do not want to stay at the campsite which can all be easily booked on www.travel.jumia.com

It is important that “Citizen tourism” is picked up by the bodies in charge, it is easier for Ugandans to promote what they are proud of, but very few know of the gem that is Uganda.